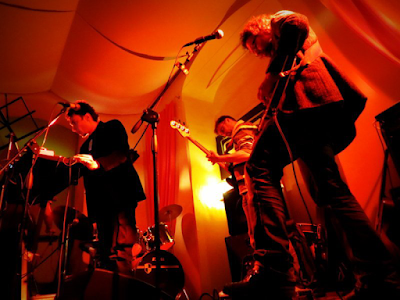 Obitus - Slaves of the Vast Machines

Eyes Wide Shot - Back From Hell

Path of Desolation - Where The Grass Withers

Although theirs sounds more like a monicker for a doom or a depressive black metal band, the guys of Path of Desolation are far from those styles. Coming from the Swiss city of Lausana, this melodeath quintet (at least, they were a quintet when they recorded this album) has been playing since 2013, and they had their first studio experience with their 2014 EP 'Soaked Jester'. 'Where The Grass Withers' is their first LP, and is a more than a decent demonstration of melodic death metal, in the vein of Dark Tranquillity, with their heavy use of synths although lacking the clean vocals. The album shows all the other elements that we’ve come to associate with this genre, like the Maiden-esque riffs mixed with more thrashy ones, nice acoustic guitars and the use of more traditional song structures. Everything is in the proper place, and the band shows that they’ve have studied every trick known in the “Gothemburg’s Guide To How To Melodeath”. The problems with the album start to show when you play it in full a couple of times. For example, the production lacks some strength, sounding clean and nice but kind of generic, and although there isn’t any truly bad song, it’s hard to point out real standouts. Nevertheless, this isn’t really a tedious album: singer David Genillard delivers great death growls and there are a couple of nice moments in this album, like the opening “The Crown and the Empty Hall”, the piano in “The Hunting Prey”, the featuring of Anna Murphy (ex member of fellow Swiss folkmetallers Eluveitie) in “The Uninvited” or the mixing of acoustic guitars and electric guitar melodies in “Exit Nightmares”, a nice closer for the album. But this is an album that prefers to use what it’s already known to success than trying to capitalize in its unique traits, which isn’t really a bad thing: we all like to watch action or horror movies, even if there are a lot of storytelling tropes that we’ve seen a hundred times and maybe more. But sometimes the repetition of elements will only appeal to fans of that particular genre, as it’s the case with the debut LP from this Swiss band. Having said that, Path of Desolation have the potential to release truly great albums if they manage to develop their strengths, which they’ve, and find a sound that they could call their own. (Martin Alvarez Cirillo)

Trollband – In the Shadow of a Mountain

In the eighties, Brazilian metal had a lot of provocative bands, but Holocausto was for sure the one that stood out the most in that area. With their constant references to the Nazi regime in their image and lyrics, it didn’t take long for them to be accused of being nazis, even if they expressed that they only adopted those symbols to express the horror of the Holocaust. And their music was as extreme as their image, because 'Campo de Extermínio' ('Extermination Camp'), their debut from 1987, still sounds as brutal and violent as it was at that time, with their sloppy technique, their blastbeats, monstrous vocals, and simple but effective thrashy riffs.

This period of rawness ended up being a little short-lived, as Holocausto decided to start changing their sound in their follow-up 'Blocked Minds', where they left the nazi image and Portuguese lyrics, and adopted a crossover thrash sound in the vein of Suicidal Tendencies. The following albums saw Holocausto with the same approach to songwriting as fellow Brazilian bands Sepultura and Sarcófago, never releasing the same album twice and experimenting with more technical riffs and some industrial and noise influences, but unlike those bands Holocausto never managed to capture the same impact of their debut. Internal turbulences and a constant change of members didn’t helped, and they split-up at some time in the mid nineties. Although they reunited in 2005 to record the hardcore-tinged 'De Volta Ao Front' ('Back to the Front'), they didn’t do a lot more.

That is why 'War Metal Massacre' is so welcome as an addition to Holocausto’s discography. With all the members that recorded 'Campo de Extermínio', with the exception of the drummer Armando Sampaio, and a cover that reminds of the one in that album, the intention is very clear and simple: they want to go back to their roots.

The most interesting part of this six-song EP is in the last three songs, the ones that Holocausto composed for this release. It’s complicated to talk about them individually because there isn’t much difference between them, but what they don’t have in variations is compensated with an incredible display of force: “Eu Sou a Guerra” (“I Am the War”), “Corpo Seco / Mão Morta” (“Dry Body / Dead Hand”) and “War Metal Massacre” show Holocausto going back where they feel like a fish in the water, with blastbeats, punchy riffs and lyrics about the horrors of war. Sometimes they sound like 'Obsessed By Cruelty'-era Sodom, but with much better sound. If sometimes critics have used terms like “war metal” and “noise metal” to describe Holocausto’s style, this are songs thet justify those claims.

“Massacre”, “Destruição Nuclear” (“Nuclear Destruction”), and “Escarro Napalm” (“Napalm Sputum”), the three other tracks from this EP, are re-recordings of songs that the band released in their first years. And here they’re present in their best versions: even if there aren’t a lot of changes, with the exception of a short rainy “Black Sabbath”-like intro, the musicians playing them, have improved their technique and the better quality sounds manages to make that the rhythms of Nedson “Warfare” Conde, who was the first drummer of Holocausto, sound as violent as they’ve to be. To “go back to their roots” is something that not a lot of bands manage to do, because a lot of times they end up sounding like tired versions of what they used to be. But with “War Metal Massacre” these Brazilians manage to combine the search into the band’s origins with the experience they’ve gained along these years. I don’t know if a lot of people were expecting new material by Holocausto, but it’s a great surprise nonetheless. There isn’t a single bit of filler in 22 minutes of music, and it’s a perfect comeback for a band that deserved a lot better. Will they manage to get that with the release of an LP? We’ll only have to wait. (Martín Álvarez Cirillo)

Italian melodic black metallers Infernal Angels feature plenty of glimpses of pure aggression that are blended into parts of mournful, disturbing sonic extremity with sudden melodic grafts throughout here which produces a fine Scandinavian angle to the music. The album is based mostly on tight, ferocious tremolo riffing that produces a strong, thunderous base for the rest of the music to offer the frantic tempos and patterns featured throughout here. Generating plenty of intensity with the blistering drumming while remaining firmly aware of the tight, frantic buzzing melodies blazing alongside the raging music featured here, and overall there’s a solid amount of work displayed here that makes for a wholly enjoyable time. The one main problem with this one arrives in the fact that there’s just not a whole lot of deviation in the music which has a ton of opportunities to express any kind of variance here yet it doesn’t really offer that here. It’s all pretty much the same general buzzing tremolo melodies and rather tight, same-sounding rhythms for the most part, and that does tend to lower the impact of the album when it’s almost impossible to figure out where on the album you are. Still, the tracks here aren’t all that bad here. Once this gets past intro ‘Amdusias: The Sound of Hell,’ there’s quite a lot to like here as ‘Vine: Destroyer of the World,’ ‘Purson: Matter and Spirit’ and ‘Bael: The Fire Devour Their Flesh’ feature these in rather impressive, explosive manners. As well, ‘Asmoday: The Impure Archangel’ and ‘Paimon: The Secret of Mind’ drop a lot of the intensity and go for more mid-tempo melodies to really give this a bit of variation. Still, that doesn’t detract from the main flaw in this one. (Don Anelli)

Things Falling Apart - Blind Hammer, I Miss You Like Nails