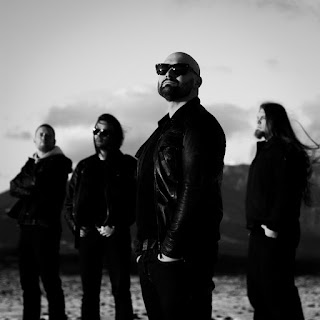 Formed in 2005 by Artur Felicijan, Dekadent is a ferocious, yet exquisite and ethereal black metal of unique kind. Though the name might imply the band is leaning towards decadence, their hatedriven art is quite the opposite as it expresses utter progress and growth with each album. Dekadent’s black metal is profoundly something else. While black metal is the band’s main orientation, Dekadent draws a variety of metal and classical influences and has incorporated elements of 60’s psychedelia, epic soundtracks and ambient music. The list of bands that Dekadent have cited as influence ranges from prime classical luminaries such as Richard Strauss, Wagner, and Dvořak to the legendary creations of black metal bands like Emperor, Bathory, and Samael. But while there are traces of Ihsahn, Quorthon or Vorph in some of Dekadent’s guitar and vocals parts, these black metal godfathers never incorporated that sort of etherial and sanguine atmosphere that one gets when listening to Dekadent. Their new album, the fourth entitled 'Veritas', sees further development of Dekadent’s music, showcasing diversion in style yet incorporating more extreme metal brutality than ever before. To expand the creative output, Artur returned to present a motion picture along the music of 'Veritas'. Abandoning their label and all sorts of conventional distribution, the band sought support with their fans by launching a crowdfunding campaign on PledgeMusic.com. The campaign was successful and allowed the album to be released in similar fashion to their sophomore release as a double album including full-length audio CD and 'Veritas' the movie on DVD. Let's talk with Artur about the new release...


Thank you for your time Artur. I would start asking how do you feel to be a metal band in Slovenia? How is the scene in your country and which is the perception of your people versus Dekadent?

Ten years ago the Slovenian metal scene got developed and strong, while in the last five years or so the scene really started to wither a bit. A lot of bands went dead, the metal concerts were not organized as often as before and most of the local metal media quit their work. Some of the stronger bands still remain, but a lot of them are gone. And even Dekadent have to struggle to maintain an active position within the scene as everything is less and less oriented towards extreme metal these days. Facebook generation, hipsters and all the feminization of the scene doesn’t do any good to the metal scene.
Of course there is a loyal black metal following on our local gigs, but to a much lesser extent than 5 or 7 years ago.
We get a lot more feedback from the international scene, especially from places like Germany, UK and USA. Which kinda makes sense as people there appreciate the music Dekadent produces. Our music is melodic and powerful but also romantic and conservative like our fans seem to be.


'Veritas' is the fourth album of your discography, coming 4 years later 'Venera', would you present it to the readers? What have you done in these last 4 years?

I think ‘Veritas’ really shows maturation and the development of Dekadent. Its technical progression and overall sound shows more consistency than on any previous album. While ‘The Deliverance of the Fall’ was more or less in a place of its own, musically and lyrically, ‘Veritas’ further develops the style showcased on our debut and ‘Venera’. ‘Veritas’ is undeniably Dekadent, all the significant melodies are there, the romantic alpine atmosphere is present even more so, while generally the songs are more brutal, direct and to some extent even traditional sounding.

Which are the strengths and weaknesses of the new album? Is there something that would not do you again in this new release and how do you consider today the work done in the previous albums?

Of course there are some things I would change on this release, maybe production-wise or even in terms of lyrics, but what is done is done. It shows certain state of time and there is no point in having regrets now. I mean, there is really nothing dramatically wrong, but every time around things get better and evolve. Every Dekadent album has its flaws and weaknesses, but fans seem to accept that. All the flaws in production or odd musical themes grow on you through time and you start to observe them from a different perspective. Most listeners like the flaws from the very beginning so I don’t feel bad about it.
And there are some songs I or other members were a bit skeptical about but now that the album is out some fans like those song the most. It’s all good and I think these flaws are necessary to give our albums that human touch as most of today’s music is overproduced and fixed in advance anyway. 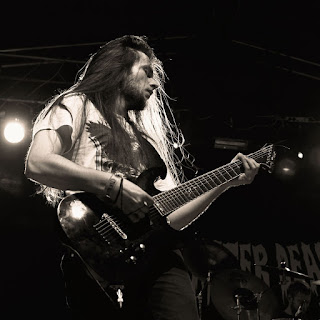 I have listened to your previous albums, but I have to admit that I consider 'Veritas' the best one and also the most complex, mixing different influences coming from the extreme scene but with a strong progressive vein: did you agree when I wrote that your sound is a sort of mix between Anaal Nathrakh,Old Man's Child and Devin Townsend

Yeah, this is exactly what I meant in my answers above. I feel ‘Veritas’ is indeed the best one, the most complete record to date and I completely hear the similarities to the artists you mentioned. I guess I find them similar to my sense of music writing and to what I try to accomplish with an album.
Years ago people compared us to acts like Emperor or even Burzum, but as these bands are not in the highlight now, Dekadent get’s compared to Anaal Nathrakh and Devin Townsend as they are more popular and honestly musically closer to Dekadent.
I turn to various artists when I need some guidance in terms of production but I usually find the musical similarities after I already complete the piece. I guess the mixture of influences I had throughout my life got me to a similar musical style as artists like Devin Townsend. I always listened different bands like Darkthrone, The Beatles, The Mamas and The Papas, Samael or Morbid Angel. All this extreme metal aggression and the love for classical harmony resulted in the music that I produce in Dekadent.

As much as I respect Dave Mustaine and have always preferred Megadeth to Metallica, please don’t compare me to that new-born Christian nut-case, haha. He really is one crazy dude.
But yes, Dekadent has always been my personal project into which I later on invited all the other guys whom I respect and am thankful for helping me out on the journey. I still write all the lyrics and music, and ‘Veritas’ was therefore again written by myself.
The lyrical themes evolve around the truth (hence veritas), behind interpersonal relations, infidelity, and to quite extent to sexuality as well. Everything is nicely concealed in metaphors, so I don’t get into to much trouble, haha.


Are you going to promote 'Veritas' with live concerts, participating to summer festivals? Where we could see Dekadent live this summer?

Indeed we are already doing concerts and festivals in near locations. We played some local gigs and traveled abroad a bit, but we are still looking for any occasion and we are open for booking. We would love to play in Italy sometime soon as we haven’t performed there in our 10 year history. Tell everyone we are looking for gigs, haha. 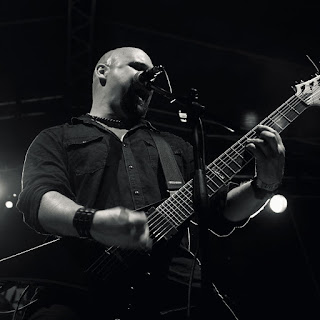 How is the Dekadent live dimension, is there something special we should expect to see when you are on stage?

We feel very relaxed onstage. We are technically experienced guys and deliver a good show. There is always some experimentation when playing live but we always try to perform with full strength and getting close to the studio sound. I am glad to say people enjoy our shows and tend to return every time for a good experience.


In 'Veritas' you experienced to be the director of a short film, would you tell us more about this experience? What about the sad story? Who are the actors? Was your first time in this role?

Basically, I did direct before, such things as commercials, music videos and so forth, but indeed I had never experienced directing a proper drama script. It was all very relaxed and personal, as I knew I had all the ties in my hands. ‘Veritas’ was nevertheless a very small project, created by myself and Andraz Sedmak. We got to know the actors and we developed a nice and friendly relationship with the main actress Vesna Kuzmic. I thought she was perfect for the role as she knows how to express that natural melancholic aura. She devoted herself to the project and I showed professional attitude and experience performance on set.
The movie itself was more or less an experiment I wanted to delve into, creating a motion picture along with the album. I haven’t seen it done before within the metal boundaries and I thought it would be something Dekadent fans would be pleased about.
Although the story is sad, like you said, it has that cathartic message and the sense of ascendance which is also present in our music. I think it showcases Dekadent on a different and non-metal level quite well. 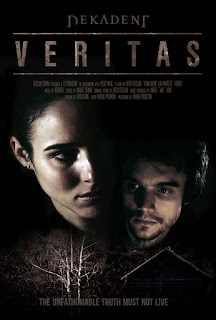 Is there something else you are planning for the future of Dekadent or shall we wait other 4 years for a new release?

The tempo is quite faster lately. We are rehearsing steadily and the communication between the band members is great. I think we will deliver something new quite sooner than usually. I have some ideas for our next release, but the real thing starts to take shape in the pre-production period. I will let the fans in the dark for now, but I can guarantee I will do my best to produce something big and glorious.


Just my last curiosity: why an excellent album like 'Veritas' was not produced by any big label?

Well, big labels don’t give a shit about small underground bands like Dekadent. The main cause is being from Slovenia, which has realistically no local market to boost our sales on. Even our current release sales are showing less than 5% on domestic market. I am not trying to look for excuses why we are not as big as I would like us to be, but that is just the case and reality of our unfortunate position. We are working hard on getting ourselves out there and it took 10 years for Italian fans to start discovering us. ‘Veritas’ was in a way our breaking point to many countries we haven’t reached before. 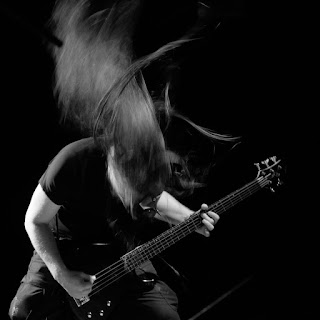 Although I drifted away from the fictional literature in the last 10 years or so, I would take the ‘The Warlord Chronicles’ by Bernard Cornwell. It is an entertaining read that would surely make the time pass quicker before the first cruise ship would come by and take me home.
I guess I would take something diverse and suiting for the ocean atmosphere. Maybe I would go with Enya’s ‘Watermark’ album, The Beatles’ ‘Help’, and Faith No More’s ‘King for a Day, Fool for a Lifetime’.
The movies would have to be quite diverse as well. Something long and epic like ’Braveheart’, great acting and drama like ‘The Godfather: Part II’, and something completely off and contemporary, maybe ‘Closer’.


Would you add something more Artur?
Just a big thank you to Il Pozzo dei Dannati and all our Italian fans. Demand Dekadent on your town and we will get there. Horns up!