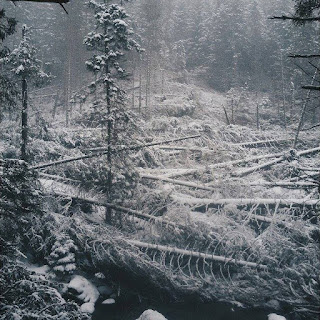 Hailing from the truly cold climes of Iceland, the unnamed members of Toska strafe ears immediately with an unrelenting, savage interpretation of influences ranging wildly from early Dodheimsgard to Funeral Mist to Windir – all vocal chaos, percussive insanity, and melodic sensibility in overflowing measure. The black metal of Toska is fueled by “an inexplicable force that one can also find in the dark majesty of Mother North”, where in response to that force, these musicians “transmit the whispers of spirits dwelling in the night skies.” And while Northern nature remains the muse for the sonics, lyrically, Toska take inspiration from Tadeusz Micinski, a Polish poet known for his apocalyptic vision and mystical awareness.

Happy to have you on board on the Pit of the Damned.

Let's start our interview: may I ask you for a short presentation of your band? Why did you found Toska, why this name, is there any link with the Russian word for sadness? Was there any desire to spread your inner melancholic feeling through the music?

We are all surrounded by forces far greater than us. These forces dwell the world and each has a tale to tell. Toska is an attempt to capture these tales.We make effort to listen to what is out there.

Citing Vladimir Nabokov, Toska "is a sensation of great spiritual anguish, often without any specific cause (...), a dull ache of the soul, a longing with nothing to long for”. This quote perfectly matches the state of our souls and perfectly puts in words what we want to convey with our music.


The Self titled EP represents your debut and I have to say that is very good, how was it born?

Many thanks, we are glad you like it. As per answer to your first question, we simply listened to whispers of spirits dwelling intangible part of our world. Our music is a direct result of inner desire to create in response to wealth of spiritual stimuli that is endowed upon us.


In my review I have described it as influenced by Melechesh, Windir and Enslaved, but I would add also that there is punk vein inside. Do you agree with my description? Which is your background and the bands that had a role in your growth as musicians?

There’s too many artists to list here, we draw inspiration from many different genres. We love Nick Cave as much as Dissection. We value punk for ethics aspect, especially around DIY and no compromise attitude but we fail to hear punk in our music.

Generally, we value music that has something more to offer than just a quest for technical perfection which tends to end up as collection of sounds rather than music. Don’t get us wrong, technical aspect is important but some artists tend to focus only on it at the expense of depth and genuineness. There’s too much music that lacks soul.


I have been in Iceland twice, I love your country, and I would like to come back again: has your land in some way influenced the writing of this album? And what exactly?

Icelandic landscapes are very raw and preserved from civilisational imprint. This certainly influences our music. Being surrounded by world as it was shaped by nature allows us to focus on exploring what nature has to offer. Also, being to an extent isolated from world allows us to be also to an extent isolated from external influences. We don’t feel pressure to fit in and are not constrained by any genre boundaries. This is very liberating and you can hear that in our music - we draw influences from different sources which allows our music to stand apart and bring something unique and interesting. Toska is away from what one could expect from standard black metal band while at the same time still being clearly black metal.


What about the lyrics included in the EP?

All lyrics are based on poems by Tadeusz Micinski, a Polish poet who lived in the beginning of XX century. We chose his work to experiment with something that is not connected to Iceland at all in order to diversify our music even further. We stumbled upon his work and found it a perfect match for the atmosphere we wanted to convey with our EP - the feeling of connection with intangible part of our world and nature.


In the last Footbal European Cup, we saw the incredible feeling between your football players and the Icelandic people with the famous geyser sound: where this connection was born? What do you mean for you to be an Icelandic man? Is it pride for your viking roots or for your strong relation with your unique land?

Nationalities don’t matter to us but we certainly feel strongly connected to land or more precisely to nature. Both land and roots are important as both shaped up who we are. Refer to previous answer as for why nature and land matters so much to us.


We know Iceland for Bjork, Solstafir and Sigur Ros, and now also for Toska, but it seems that there is a local scene full of bands featuring high quality standards and also a certain originality. Where (and why) this originality is born? Is inside in your DNA or what?

Remoteness of Iceland has positive side of being less prone to be influenced. Many artists all over the world experiment with escaping the world or avoiding hearing any music when creating new material in order to avoid being influenced. In Iceland, it’s relatively easy to cut yourself off and slow down to create truly personal art, one that flows from within self. So, it’s more a case that seclusion rather than DNA allows for good levels of originality to transpire in art that is being created in Iceland.


Did you get already the chance to play live? How is a show made by Toska, or how would you imagine it?

In order to create or play music, we need right atmosphere. This can’t be recreated whenever we wish to. A specific aura has to come to us, creating or playing is impossible without it. Because of that, we chose not to play live shows as it wouldn’t be right to force it.


What should we expect from the next album that it should be the full-length?

The music we have so far for full length is an extension of what you hear on EP. It’s still deeply rooted in black metal but filled with even more surprising twists and turns to keep us and listener engaged and drawn in. There will be some classical music influences and piano parts to enhance the atmosphere and compositions to make the LP even more diverse. We are really excited about how it shapes up so far.


A strange question, just for my curiosity: what do you do in your daily life? What kind of jobs do you have? I was so curious during my wandering to see a lot of houses far from the main cities, and I was used to ask me how the people was used to live?

We all live in cities and all have standard modern jobs. There’s nothing special about our non music life.


And now my recurrent last question: during my face to face interviews in my radio show, I am used to ask for the desert island list: three books, three records and three movies you cannot live without?

We can’t agree on anything collectively as we all are inspired by different books, records and movies. The only thing we all agree on is Dissection 'Storm of the Light’s Bane'.


Thanks a lot guys for your time, I would like to leave you these last few line for the Italian fan.

Many thanks for your interest and interesting questions!