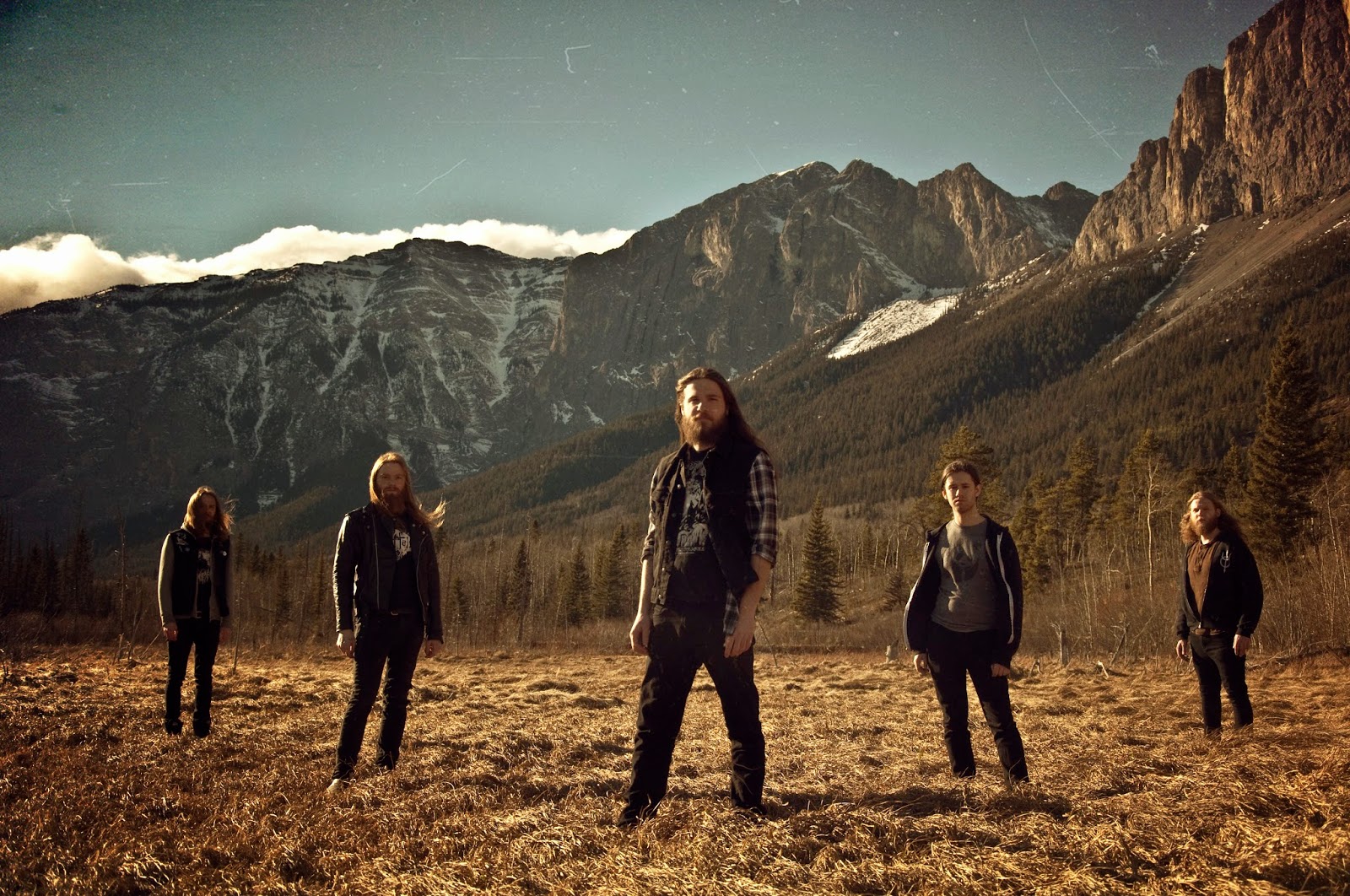 A two man project started in late 2011 with Byron recording and composing all of the songs and Brandon on vocals. The idea was to mix aggressive yet melancholic black metal passages with interweaving clean and ethereal doom parts. A two song Demo was created and released June of 2014, clocking in at just under 20 minutes. With this demo a full line-up was recruited and live shows immediately commenced for the remainder of that year. In February of 2015 the recording of a full length will begin with plans of a release by that same summer, followed by a Canadian tour in the fall.

Hi guys, welcome into The Pit of the Damned.
There is a lot of noise and hype around your name, do you guys realize that?

Byron Lemley: We are currently only concerned with what we are doing now. People have been interested in our demo, which is great for them if they can take something from it, but to us that recording was a statement of where we were in that time emotionally, and nothing more.

Rhys Friesen: Existence never rests in order to cater to any pretentious laurel resting...and neither shall we.
Could you let us know something more about the creation of the band and the choice of the moniker?

BYL: I created this band for my own personal vision to be manifested in a scene that did not represent my emotional state well enough. As time progressed, it turned into something much more. This is an outlet for everyone in the band to feel vulnerable and convey the deep emotions within themselves that need to be filtered out. One overall theme we have as a group is to always move on from what no longer matters. A great quote from Roger that we adhere to is: “The river is the best place for reflection, as it is always moving forward”. In regards to the name it is taken from Tolkien lore. The Black Númenóreans were a race of men who eventually died out because they let greed and power ultimately corrupt them. We have destroyed our earth for that very same reason. We feel this choice of a name very accurately parallels where we are now as humanity.

Which bands influenced your sound? The fact that you live in the west area of Canada, could that not be an influence for your mood and sound? Especially the proximity to the Oregon/Bay area scenes (Wolves of the Throne Room, Deafheaven, Agalloch). Has this had a profound impact on your music?

Roger LeBlanc: Personally, I seek out music that doesn't lie to me, that is honest and truthful. It is becoming extremely difficult to find that honesty in metal music and its many sub-genres. I have immense respect for Wolves, Deafheaven and Agalloch, they are all very true to themselves and from where they come from. They don't let mass opinion or any elitist bullshit get in the way of their creative vision… Mass opinion and mass approval is individual laziness.

BYL: Those influences have seeped into our music. But, anything inspiring and genuine, music and non-music related, will eventually do that. It's inevitable for that not to happen.


How is the metal scene in your area?

I have reviewed your Demo (75/100), and I love your music for its vein closeness to Panopticon, Agalloch and Fen. What else have other people said about it? Do you agree with these comparisons?

Brandon Lemley: Sure, it's a close comparison, but we really feel we have found our own voice on our upcoming album, and it will only progress from there because we never want to repeat ourselves. If you do then what's the point of writing music?

Would you speak about the new upcoming album that will see the light next summer? What about the lyrics? The process of composition? What we have to expect from it? Are there any changes with the Demo EP sound?

BYL: We record everything at our own studio, so it gives us the time and the right headspace to write what we do. It's a very cathartic and rewarding experience to do this within the walls of our own place of worship. That might come as pretentious but I assure you it's not. Every time we jam and write it is a spiritual experience for us, because we let go of everything outside of us and serve the music at the given time to fully be lost in its embrace.

RL: The demo was much more intimate. Our full-length takes you out of a corner and pushes you into the great vastness of existence. It's a terrifying concept and I feel that exploring that idea brought a lot of frustration and anger into the material. It also begot many beautiful moments of clarity and peace amongst the emotional turmoil. It can be a very rewarding journey for the listener.

RF: I had no trouble joining this band as a contributing lyric writer. The majority of my creative output during my life has been dealing with the paralyzing anxiety of existence. My contributions thus far have been geared towards the vertigo inducing freedom of destroying the shackles of religious belief. I have written of this before in many different abstract ways in other projects but this full length is about approaching existentialism, as we see it, head on. I personally like to write of the fear and disgust that I experience as a person in order to understand it and move on to a life that is as steadfast as I can muster.

BYL: The new album will be out this summer. Thanks for taking the time to interview us.

Thanks guys, hope to listen to 'The Gift of Man' very soon...