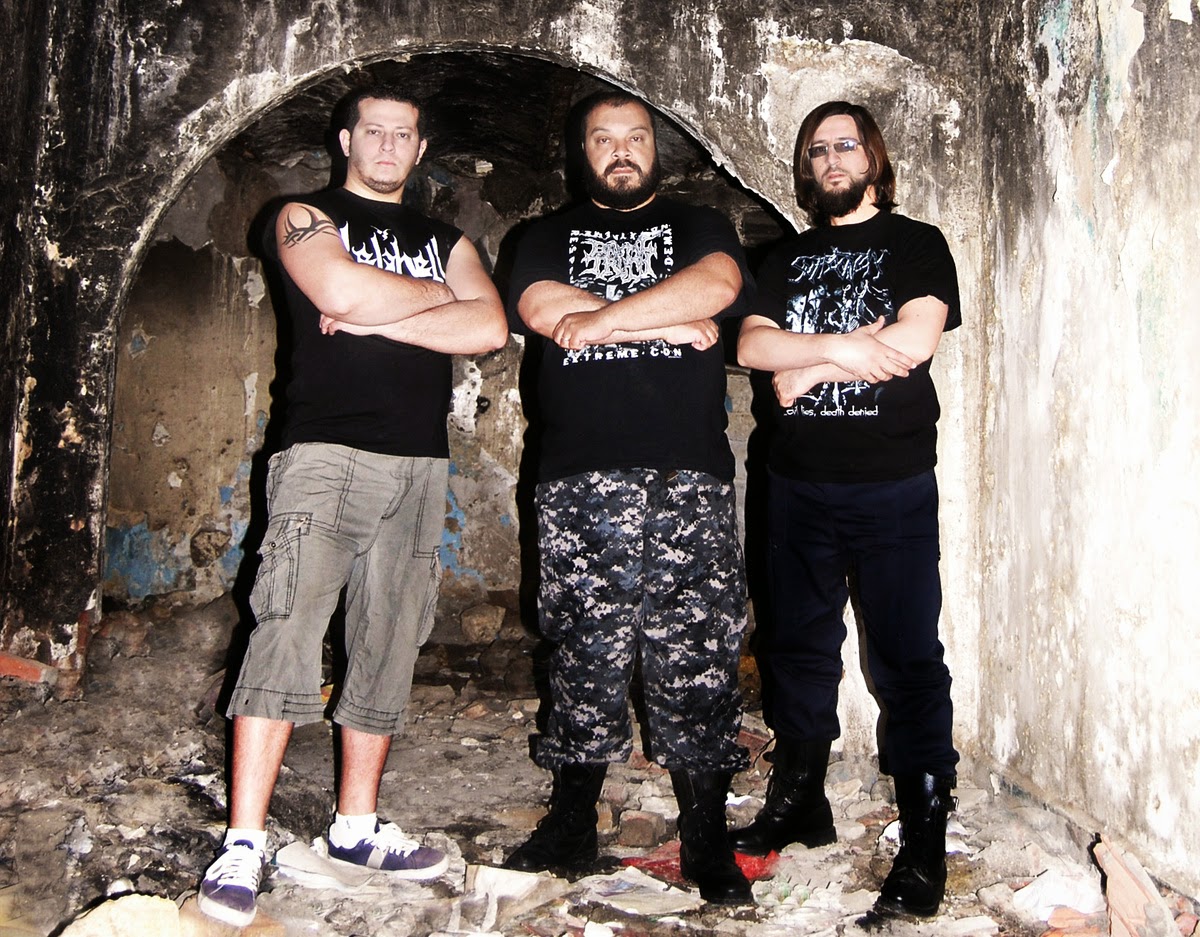 
Hi guys, welcome into The Pit of the Damned. For us, it is quite strange to have reviewed a band from your country, Algeria, would you spend some words about Lelahell?

Lelahell are one of Algiers’ newer extreme metal acts, their concrete-crushing death metal bludgeoning skulls since 2010. Founded by Redouane Aouameur (A.k.a Lelahel) who is no stranger to the Algerian metal scene as he has already been in other bands including Neanderthalia, Litham, Carnavage and Devast.. Following the completion of 2011’s ‘Al Intihar’ EP, fellow Algerian metallers Slave Blaster and Nihil (who also form the rhythm section of black metal outfit Barbaros), completed the ranks. In 2012 Goressimo Records officially released the band’s debut EP.


Which bands influenced your sound? In the review, we mentioned Nile and Pestilence, but I listened to also the early Orphaned Land, what do you think?

I play metal for more than 20 years, and never got any problem in my country, I think that you have a false idea about our countries which is transmitted by your medias. In Algeria the metal is considered as a western culture and unknown by the mass medias. So people in general don't care about it!


Would you speak about the process that led to 'Al Insane... The (Re)Birth of Abderrahamane' composition? How is the song writing process?

I started the writing process of guitars album and structures just before the Ep release in Spring 2012, after that we spent around 6 month to finalize the album (drums, bass, lyrics, vocals,..)

In January 2013 we started to record drums, two month later we started the recording of bass and guitars. The vocals were recorded in august 2013 just before our first tour.

After that I was going to mix and master the album, but it was difficult to find a suitable sound for our music which was the most arduous part of the recording process, so we decided to search for a producer, and the time to find someone for that we were in December 2013. The album was mixed and mastered by Ivan from Anthropocide studio from Belarus. He did a great job, this guy is very patient and talented! and the album was finalized in march 2014.

Regarding the lyrics we get the inspiration from our daily life, and past experiences. The first song of this album “Al Intissar” is an hymn to victory and all against those fuckin’ losers who complain all day long without doing anything from their lives. Move your ass fucking assholes! "Voices revealed" is inspired from the memories of Phillip Garrido a serial killer, "Hypnose" is a message to all our governors in the planet ! "Am I in hell?" is a question that every one asked at least one time in his life, "Kalimet essir" is a tribute to our Martyrs, "Black hands" is about the difference between the rich and poors , “Hillal”, has a more philosophical concept and it is about the interaction of the human with the nature and "Mizmar" talks about the human pleasures!


Which were the feedbacks on the album?

- Algerian release of the year' at the GMA Awards 2014 : http://globalmetalapocalypse.weebly.com/other-music-news/gma-awards-2014-are-a-go-with-albums-of-the-year-winners-released-part-15

For a first Album, yes we are very satisfied!


How is difficult to be an African band to approach the European metal scene?

The main difficulty is to play shows because we need to pay for ticket planes and renting back line to play in Europe which represents a lot of money for us. And a band that don't play a lot of shows don't get a lot of exposure, and the big labels won't sign us.


Will be there the chance to see your band on stage in Europe?


What about the metal scene in Algeria, any bands to suggest?

The scene isn't so big, but it is existing since more than 20 years and there are some good promising bands.


Next steps? Is there a new album in preparation?

Actually I'm writing riffs of the second full length that maybe will be recorded at the end of this year!


During my face-to-face interviews with bands during my radio show, I am used to ask the “Desert Island List”: three books, three records and three movies you can’t live without, what about yours?

Three Movies : no one i don't watch movies

Would you add something more? Thanks for your support! and stay brutal!