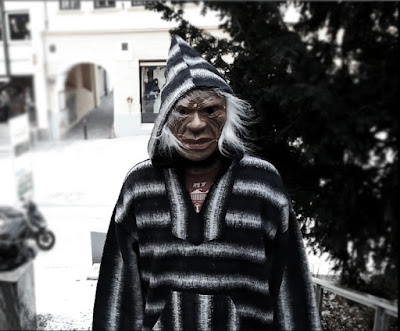 Nagaarum represents a one-man-band born from the ashes of Pigballoon, which started its activity in 2008. He considers the project as a playground for his musical experiments, which was established after having completed the first album with GuilThee (one of the other two bands, along with In Vacuo in which Nagaarum plays). 'Ûrerdõ' was the title of the first record released in 2011 under Nagaarum moniker. Nagaarum released 15 albums and two splits working with many labels: GS Productions, Frozen Light, Endless Winter, GrimmDistribution, Aesthetic Death and NGC Prod that is Nagaarum's own label. With regards to music, the creative work in Nagaarum’s NGC studio is not restricted to genres. In terms of style, the records span from ambient to post-rock with doom and black metal influences, being the notable other extreme. One criterion is that all music played on the album (instruments, vocals, mixing, and mastering), all lyrics and graphic design have to be authentic. 'Apples' is Nagaarum’s 17th record. Besides the music project, Nagaarum was also one of the editors of Fémforgács, a cult, Hungarian metal webzine with significant history.


After two albums reviewed here in The Pit of the Damned, we would like to meet the mastermind behind this monicker. Could you present your band, that although 17 albums released, was born relatevely recently, in 2011, am I right?

Ohh, many thanks but I am a simple guy only. Nagaarum is an artistic concept with dark, eclectic and technically simple music. When I started the project, I took some statements. I have to do everything from the composition to the publishing. Playing all the instruments, mixing, mastering, lyrics must be born by myself. In the past I wrote all the lyrics in Hungarian but now - the album 'Apples' - was translated to English by one of my friends, Roland Szabó. Not a big story anyway... I can work quicker than others, so I do not need partners in Nagaarum. This is the easiest way for me.


So, after 17 albums, how is possible that you are so inspired, considering that you are involved also in other projects - I think to In Vacuo for example? Where this inspiration was born?
The Universe is an inexhaustible source of inspiration. A tree, a rock, a flower, the air, the snow, the sunshine, stars and all what was created full of eternal sparks and give to me all the idea for composing the music... But in all creative works, a lack of inspiration can occur again and again. I am able to recognise this and handle it successfully over the years. I used to use a random sound method in such case, and this method produced some of the most interesting moments.
Our method with In Vacuo works in a different way. Peti - the other member of the band - uses to start composing with the drums. Once all the drum patterns are recorded, I start to record the strings. And at the end, we perform the throat killing as usual. The subjects of In Vacuo albums and the lyrics always came from Peti.


It is also particular to see that your music was born as ambient sound, then it evolved into electronic, to arrive in the last works with also a predominant part of extreme sounds, even if played in an experimental vein. Could you explain such progression? And what about your influences?

I don't really feel this progression, because I always want to compose ambient, electronic and metal tracks as well. The main reason for the lack of metal parts in the early era was due to the fact I couldn't play the strings. Originally, Pigballoon (the first name of the project) would have been a psychedelic rock concept similar to early Pink Floyd materials - so I would have like to compose songs inspired by the works of those five masterminds. My main influences are rooted in 60-70's. The experimental rock of the 70's like Thin Lizzy, Uriah Heep or Pink Floyd maybe are my biggest idols. I am listening to many more pop music, like Tears For Fears, Duran Duran, Depeche Mode nowadays... I like very much ambient, funeral doom shits and black metal. In addition, I need some punk and other rat's music but this depends by my mood... And at the end - I like a lot the absolute silence too.


The last album is 'Apples', a concept album on science and its spiritual aspects, why such decision? Could you tell us much more about the writing of this album? Could you explain also the content of the lyrics combined with a music that is able to mix once again ambient, electro, black, doom, progressive? Have you read our review, do you agree with our analysis?

Yes, your review is profound, it seems you dig into the subject well. I think that Isaac Newton was the greatest scientist of the world all time. Spirituality was so clear to him, as the apple would fall when dropped. Two phenomena - religion and science - became one in his mind. He said: "God gives us signs to discover the rules of the whole world". There were two more scholars in the XVII century who worked in close contact with Newton: Robert Hooke became his main opponent when Newton explained his theory about the prism. Newton told that the white light contains all colours but Hooke who was an influential member of the Royal Society laughed at this statement, leading to a lifetime of hostility between them. The third scientist who appears in the album is Edmond Halley. He tried to be a mediator between Newton and Hooke, helping Newton finishing his masterpiece 'Philosophiae Naturalis Principia Mathematica'. The appearance of these three different persons needs therefore different styles to generate and interpret the music.


Nagaarum is a one-man-band, this means that it is not possible to see you on stage, is it true? But how would you imagine a concert by Nagaarum, do you have any particular idea?

No, I have no any idea. :-) I am not interested in live shows. I think this music can't be performed in the stage flawless form.


You live in Hungary, where we know your colleague of Thy Catafalque that in some way has a similar experimental approach to the music, do you like them? Are there other particular bands in your country you would like to suggest us? You have also your own label, do you want to recommend us some of the bands of your rooster?

I think that Thy Catafalque is not really similar to Nagaarum in this moment. On the former TC album, Tamás used elements which was used by me too, but the new releases turned to another style, I don't really like it. Beside that, the new project of Kátai Tamás, called Neolunar, is one of my favourite material in the last couple of years. He is better in electronic stuffs than metal.
About other bands, there are many brilliant bands in Hungary, you can check these: Kolp, Veér, Oaken, Karst, Pagan Megalith, Sear Bliss, Witchcraft, October Sun, Sheep in Wolves' Clothing, Astru, Tomusz, P.F.A., Grrrmba, Nadir, Mytra, Blind Myself, Watch My Dying, Aseroe, ék, Skullthrone, Müon, Hamvak, Shum, Mare Erythraeum, Burning Full Throttle. Sorry if I forgot to mention any worthwhile.


17 releases in 8 years, shall we expect more things from the future? Are you working on new materials? Which is your ambition in Nagaarum?

Yes, I have been working on the new mateialr. Future is flexible and I don't really know to plan as usual. My only aim is to blow my brain day by day or year by year. My energies couldn't deflated without composing. 1-2 albums in one year is a comfortable speed for me. I am a lucky guy, because I have a lot of free time.


Now, your last message to the readers of The Pit of the Damned.

Go out to the nature! Don't let die the spiritualism!