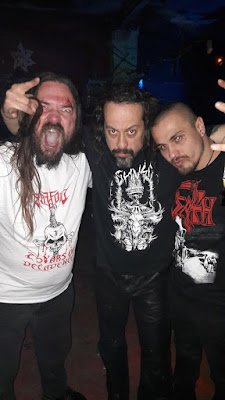 ghUSa are an old fashion French death metal band, influenced by acts like early Entombed, Dismember and Death. Let's talk with these guys, discovering much more about their long history...

Hey guys, great album your last ‘Öswedeme’, it brought me back of 25 years, at time when ‘Clandestine’ and ‘Indecent and Obscene’ were released, as it combines death metal with a lot of groove and with something of ‘Symbolic’. What do these albums by Entombed, Dismember and Death represent for you?

The three groups you mention are indeed great influences for us. However we each have our favorite albums. If I repeat the three groups quoted in your question, I would say that the first album of Dismember 'Like an Ever Flowing Stream' is my bible, yes I know we do not say that for Death Metal. While 'Clandestine', though marked by the absence of LG Petrov, is Death Rock's album that set the bar so high that even his sire will never succeed in repeating the feat. Yes, we are a tribute group to this scene for many reasons. The first is that we were born at the same time as these groups, but with, at the time, a less talent that did not allow us to break through a certain success of esteem. We will never deny this period and cyclically we are in fashion or completely outside. The movement that had returned to its apogee four years ago seems again to suffer a decline in public interest. We can be accused of many things but we are never denied and I do not want to change our course. Death Metal is our life!

Your moniker, ghUSa is the acronym of God Hate Us All, that is also the book written by the novelist Hank Moody in the TV American series 'Californication'. Is there any relationship with that? Why you chose that moniker?

We chose this name in 1989 and Hank Moody was not yet a famous wrier. Our name comes from a city in Nepal called Ghusa which could be translated as: "The Gates of Paradise". By the time, I chose this surname I found that the dichotomy of this situation for a group of Death Metal was most interesting. I was accused of having picked up Slayer's discipleship, and as I'm not ready for a provocation, I decided we'd make a Death Rock version of this fantastic piece again. Since then, no one ever speaks to me about this false inspiration. A little something tells me that I will continue in this way, so if someone still wants to accuse me of something, I am ok.

Your band exists for much more than 28 years, but you released only 2 full lengths, what happened, why so poor releases, considering that the debut album, ‘Letter to My Son\'(s)’ is dated 2006? If it was released in 1992, it could be considered a masterpiece just like ‘Left Hand Path’ or the other albums by Entombed, Dismember and Grave, do you agree with me? I cannot consider them as influence for you as they were of the same period of your foundation, is it right? So, which are your real influences? Could be the band of Chuck Shuldiner the real influence for you?

Everything you say is absolutely right. Neither Dismember nor Entombed could influence us at the very beginning of our career. At that time, I was in Germany and the group was half German and French. I had to leave Germany in 1992 after a tour and a discographical signature that should have opened the doors of an Eden. My choices were quite different. I then devoted myself to other projects, like Carnal Lust, Yorblind or No Return, and unfortunately or fortunately, I am faithful. It was only during a break that I recorded the first album of ghUSa, while some songs dated from our period 1991/1994. What you say touches me a lot and maybe if we released 'The Nail' in album format in '94, as planned, we would have broken through. But we did not do it and nothing I could say would change anything. I'm just proud that we're still there 27 years after my first rehearsal and writing the first piece. The fact that I cannot replay the guitar is awfully lacking, but I know that I am very well surrounded. And to answer the last part of your question I had actually two main influences in 1989 when I formed the band, the first is Chuck Schuldiner with the album 'Leprosy', but the second was Lemmy Kilmister with the album 'Overkill'. I do not remember anything before these two monsters, although unlike the legend the first band that took me into what we now call Metal is ... Iron Maiden. All my apologies Dory.

Let’s talk about ‘Öswedeme’, could you tell us much more about this word, it looks like Swedish, but which is the reality and which is the essence of it?

This album is titled 'ÖSWEDEME' which can be translated as Old SWedish DEath MEtal. All is said.

What about the album, where was recorded, how much time did you spend in studio? What about the song writing process, is that so long, considering that the previous one was release more than 10 years ago? What did you do in these years? And what about the lyrics of ‘Öswedeme’?

There is absolutely nothing to reproach my musicians, I am the only one responsible for the few pieces recorded and put on the market by ghUSa. For 20 years I have absolutely everything written words, music, arrangements, etc ... Then, during the partial loss of my right hand I had to accept the continuation of the adventure without holding the guitar. Vince is much more than I have been. Technically he buried me and no young lady ever complained of his fingering. Me neither either. We are a remote group and now everyone sends me models that I disassemble and that I go back to prolong the ghUSa adventure as I consider it must be. I take care of all the texts, the arrangements, the strategic choices, the artistic and the partnership contracts. I have often been told that I was wrong, but as you can see no one has yet succeeded in making me change my mind. It's like the studio, I know exactly what I want to get like its. I do not want touch-ups, trigger, dubbing on the voice, 24 guitar tracks, I want live and I record in the conditions that come closest to the scene. To this day the master in the matter is Jipouille de St Loup. He is the sound engineer of two bands in the studio and since he took over the reins the place of the organic has resumed his rights. It is not just a push button, it imposes a work on the voice and I have only two days to record all vocal parts for the sole purpose of keeping spontaneity. Which means that in total we all have them 2 full days of studio that is 10 days in total. We are not talking here of a pecuniary choice but of a true decision only tending towards the artistic. Many do not understand it even in the musicians who participated in the life of my training. They simply continue their route outside mine and I continue, as far as possible to support them.

What shall we expect in the next years, a new album in 2025? Of course, I am joking but do you have new plans for the future? Concerts to let us know? Side projects or something else?

No musician in ghUSa is bound by an exclusivity contract. Everyone has the right to come, to leave and even to have their own group. We have almost finished writing the next Ep, but nothing can tell me at what time we will be in the capacity of the recorded. We are still in a promotional period for 'OSWEDEME' and I would like to finally get to the bottom of things. We had to leave on the roads with Necrowretch and Interment but some decided otherwise. The cancellation fell 10 days before departure and we all hope it is only a handing over. Our next two concerts are in November including 1 in France in Clermont Ferrand and the other in Belgium.

And now my recurrent last question: during my face-to-face interviews in my radio show, I am used to ask for the desert island list: three books, three records and three movies you cannot live without?

If I were led by some events to live on deserted island, I would in no way want to book, album or film. Just my wife and I to rebuild our humanity. The rest may be my best memory, I will find them later...