Phased, hailed as the "Hawkwind of doom" by some, is a band that plays psychedelic motor-doom. Theirs is a sound that is leaden and dark without falling for the usual clichés of the genre. They are a classic power trio with members from Sweden, Finland and Switzerland.
The history of Phased begins in 1997, when Chris Sigdell founded a group named “Phased 4°F”. This early incarnation played spacey noise-rock. Since 2001, Phased are a trio. The band - including musicians Chris Sigdell, today's drummer Marko Lehtinen and founding member Michael Greilinger - recorded stoner/space-rock album "Music For Gentlemen" with VO Pulver (Gurd/Poltergeist) in early 2002. A year later it was released on CD by Lux-Noise Records Switzerland receiving good reviews from European magazines. Chris Walt then replaced Michael and during the following three years, the band played with bands such as Dozer or High On Fire. Stefan Koglek (Colour Haze) suggested their next release be on his own Elektrohasch label and so, in the spring of 2006, Phased recorded "Medications" - again at VO Pulver’s Little Creek studio in Gelterkinden. The result was a loud doom and stoner hybrid which was released on CD with worldwide distribution. This time, the album gained good reviews from all over the world - from Australia to Chile and Finland to Greece.
By January 2009 it was time for a new album - once again they recorded with VO Pulver. The sound had drifted towards slower and heavier sound, and American/Danish synthesizer player Scott Heller of Øresund Space Collective contributed some of his psychedelic wizardry... doom goes krautrock? Stefan Koglek liked the long-titled album "A Sort Of Spasmic Phlegm Induced By Leaden Fumes Of Pleasure" and it was released by Elektrohasch. Good reviews were coming in from everywhere - "Rock Hard" and "Ox-Magazin" also back with top praises. The band then set off play in Italy, Germany, France and Switzerland. By 2012, Chris Walt - after years of friendship and dedication - parted for good. Marco Grementieri (formerly of Zatokrev) replaced Chris, but Nadine Lehtinen (formerly of sHever) also stepped up and played when the band was in need of a bass.
After an absence from the studio for over five years, it was time to record yet another album. In February 2014, with founding member Michael back on bass, Phased set down what was to become 'Aeon' at Helium Record in Basel. While this doom monster was being mixed in London by producer Richard Whittaker and mastered in Birmingham by Esoteric mastermind Greg Chandler, another line-up change took place: Harald Binder joined on permanent basis. In the autumn of the year 2015, and after playing as a three-piece for 15 years, Phased added a second guitarist to enhance the wall of sound. His name is Florian Schönmann. 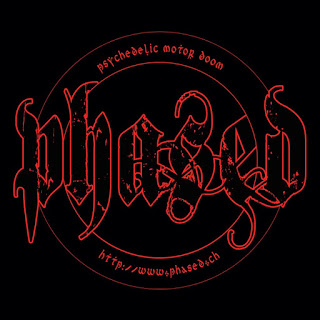 Hi Guys, nice to talk with you (even if by mail only). Would you spend some words on the band? A brief history of Phased.

Marko: We are from Basel, Switzerland. Chris and I have been playing together since 2001 – with different bass players. We have recorded four studio albums so far, two of them for the well known German stoner label Elektrohasch. First our style was some kind of psychedelic stoner. As the years went by we got slower and slower, and the new album 'Aeon', that was released in December on Czar of Bullets, is pure doom – or let's say doom with some psychedelic elements. We always were a trio by the way, but since last autumn we've been a quartet for the first time by adding a second guitarist to the line-up. Currently Phased are: Chris on vocals and guitars, Harald Binder on bass, Florian Schönmann on second guitar and me on drums.


On 'Aeon' you've radically changed your sound, shifting form garage stoner to a psych doom very peculiar and dark. What are the reasons of this big change? I found it quite unique, since usually it happens in the other way round, e.g. bands that change from death to stoner, while you are becoming more uncompromising as time goes by…

Marko: It was a natural process for us. We didn't decide "hey, let's play some doom from now on", but maybe it happened because we had got a bit bored with the whole stoner rock scene after all these years. We had played with so many international stoner bands, and we started to feel like: Well, they're all cool but not our cup of tea anymore. You know, when we started with Phased in 2001, I already felt that we were a bit late with our stoner rock. I had seen Kyuss live in 1995 and bought their records then. I had liked the Spiritual Beggars in 1997. So I felt we definitely were not the first ones to play stoner. And I'd never had thought that twenty years later people – mostly in Germany – would still listen to pure stoner and all these new stoner bands formed in the 2010's.

Chris: When we began we just played whatever we felt like, and there was a scene for that, the stoner rock scene. Then, with time, we just slowed down a bit, and then some more. I used to play in the slowest punk band of Switzerland before Phased, so that was natural for me. And then I always had liked St. Vitus and was turned on to Electric Wizard by our first bass-player. Things evolved from there. Doom just feels natural for us at the moment. Who knows where we might head next?


I found 'Aeon' very interesting because you still maintain your own personality even in a genre like doom, where it seems that nothing is left to say. How would you describe your last record?

Chris: It is our own personal doom, haha… Well, since we don’t really care about genres or standard formulas for writing within a set genre, our music easily becomes a little bit different compared to other bands, more individual. Our new record is maybe more consciously doom, in as much as we deliberately kept the tempo slow on all songs. We really like spacerock and krautrock too, so we surely wanted the sound to breathe S-P-A-C-E. I think music has to transport you to other spheres, otherwise it’s bland. I hope we succeeded in doing that.


Psychedelia and space rock seem to be very important for Phased. What are your influences in that way?

Marko: Yes, absolutely. We love the psychedelic bands from the late sixties and early seventies, all these strange groups doing what they wanted. And we definitely love Hawkwind. Their records until 1975 are a big influence for Phased.

Chris: I have accumulated some really weird and trippy records from the sixties, so that influences us very much. We just like the halluzinogenic element and I think it’s nice to have that in our music, but Hawkwind and The Stooges are maybe the biggest influences. We definitely try and model our songs on that spaced-out and hypnotic thing, this mantra. I am also a big fan of the German band Vibravoid and so am somewhat influenced by them as well. 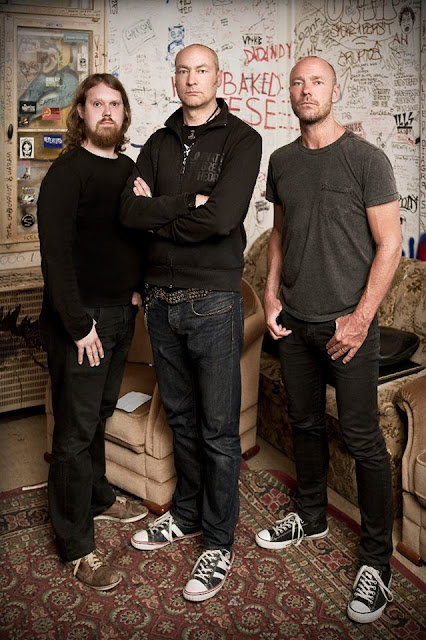 What are you listening to at the moment? Is there any underground band you would like to recommend to the Pit of the Damned readers?

Chris: Sticking to the genre, it would be Salem’s Pot and Saturnalia Temple. I also just discovered The Body and With The Dead.


And now, in the end, a simple (it is never simple, I know) "desert island list": three books, three records and three movies you can’t live without.

Chris: On a deserted island I wouldn’t listen to music and not have time for books. I would bring a survival kit! But I know what you are asking for, so here we go: the 'Ringworld' books by Larry Niven, Lautréamont’s 'Songs Of Maldoror' and 'Catch 22' by Joseph Heller. Stanley Kubrick’s '2001 – A Space Odyssey', Coppola’s 'Apocalypse Now (Redux)', and this great film called 'Zardoz'. As for the music, I just choose at random as there is so much that is really good: 'Karma' by Pharoah Sanders, 'Heathen Earth' by Throbbing Gristle, and 'Love And Other Crimes' by Lee Hazlewood.

Marko: For me it's absolutely impossible to name just three records because there have been simply far too many important ones in my life. But let's say: 'The White Album' by the Beatles, 'Houdini' by Melvins and 'Loveless' by My Bloody Valentine. My favourite books are all from the Swiss writer Max Frisch: 'Montauk', 'Stiller' and his collected diaries from 1966-1971. My favourite films might be Kubrick's 'Space Odyssey', Polanski's 'Rosemary's Baby' and maybe the French four hour movie 'La Belle Noiseuse' with Michel Piccoli from 1991.

Thanks guys, hope to see you soon live...