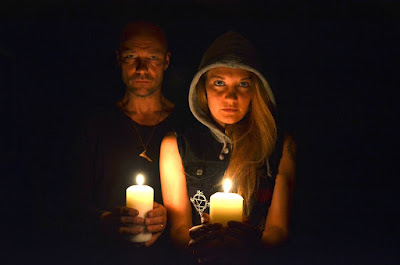 Ashtar is a duo from Basel, Switzerland, formed in 2012 by the drummer of Phased and the ex-bassist of shEver. They create a haunting, magic blend of Black Metal, Sludge and Doom – an intuitive, intense hybrid of down-tuned archaic riffing, heavy bass and desperately sick vocals with layered, eerie saturnine melodies, telling about abyss and beauty, melancholy and chaos. Ashtar's debut album 'Ilmasaari' ('Island of the Skies' in Finnish) was recorded between December 2013 and April 2014 at OSA Crypt in Greifensee, Switzerland. It has been mixed and mastered by Greg Chandler (Esoteric, Lychgate) at Priory Recording Studios in Birmingham, UK.


It's a pleasure to interview you; as you come out of the underground, would you be so kind to give us a short presentation of your band and your previous experiences, as I suppose that you are not rookies?

Witch N.: We are a duo from Basel, Switzerland, playing heavy music in the intersection of doom, black metal and sludge. Before forming the band, I was the bassist of the female doom band shEver, Marko is the drummer of the space doom band Phased. We met for the first time when these bands played together in 2011. Soon after, we did some jams on guitar and drums. Our musical connection instantly was there, and some songs developed quite quickly. We realized that we were happy to have other roles in a band than we had before as bassist and drummer – to do a record with our own songs and play all the instruments on our own. We just felt the need to do our own thing finally.


'Ilmasaari' is your debut album, how do you describe it? I wrote that it's a mix of black, doom and sludge (and also post rock), played in the Esoteric vein, do you agree?

Marko: Yes, there is definitely a lot of doom, sludge and black metal on our album. We both come from doom bands so that influence is kind of natural for us. Witch N. has been listening to a lot of black metal in the last years, so that part comes mainly from her. And we both like the energy of sludge. But post rock? We like many post rock bands but we're not particularly influenced by them. So if somebody hears some post rock on 'Ilmasaari', it's okay for us but not our intention really. And the influence of Esoteric, well, it might be there on an unconscious level. We really like Esoteric and get on very well with Greg Chandler. But there are other bands that are more important for Ashtar's sound – for example Dark Buddha Rising, Wolvserpent, Glorior Belli or Khold.


Very strong are also the emotional aspects of the album. I was thinking about the long space rock break of "Celestial" for example. Would you comment the hellish, sludgy atmospheres that are possible to meet listening to your album?

Marko: We think that Ashtar's music is very much about atmosphere and emotions rather than technique and catchy hooks. We want to take the listener on a hypnotic trip – not even a hellish or bad one. We think that our music is beautiful and positive in its own way, even if it's desperate and sinister at the same time. We work a lot with long, repetitive instrumental parts to get the listener there.


I have to admit that when I listened to the album for the first time, the voice of Witch N. remembered me the voice of Cadaveria in the early Opera IX. Do you know them and their esoteric albums?

Witch N.: I have to admit that I only knew Cadaveria by name. But as you compared my voice to hers, I checked her music out and I absolutely will have to get some of the early albums as 'The Call Of The Wood' and 'Sacro Culto'! 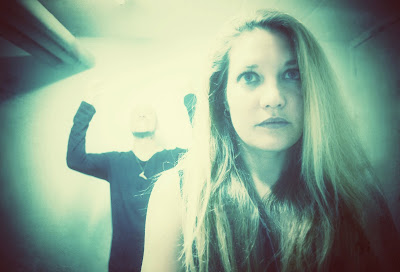 Does the esotericism (or the sorcery?) play an important role in the economy of this album, I mean are music and lyrics influenced by it? And in your life?

Witch N.: I think it’s difficult to answer this question, because esotericism or sorcery nowadays is often nothing but a worn out cliché – at least in the artist scene. Too many bands and too many individuals have already used or misused these terms. We don’t pretend that we are blessed with supernatural forces – and we don’t do blood or fire rituals at home. But I would say that we are both spiritual beings in our believes and feelings, and of course this has influenced the music on 'Ilmasaari' too. Concerning my lyrics, they mostly are about spiritual and magic experiences, about the forces of nature. But I don't like to analyse my words – the listener should be as free and unprejudiced as possible. First of all I want my lyrics to be an addition to the musical atmosphere. I try to create a special feeling, mood or vibe, to draw a certain picture.


You are from Basel (Switzerland). Did historical bands like Samael, Celtic Frost, Sadness or Coroner play an important role in your development as musicians and in composing 'Ilmasaari'?

Marko: I couldn't say these bands were important for my personal development as a musician. I listened to completely different music years ago, when I started to play drums: hard rock, prog, pop, new wave and fusion jazz. But I love Celtic Frost – and Tom Fischers new band Triptykon – and I have a lot of respect for bands like Coroner and Samael.

Witch N.: For me it's similar. The bands you mention did not necessarily play an important role in my development as a musician, at least not more than other bands not coming from Switzerland. But my personal connections especially to Tom of Celtic Frost did for sure influence me deeply. And I remember that I listened a lot to Samael’s 'Ceremony Of Opposites' album just when I joined my first band.


As you are only two members in the band, would it be possible to see Asthar live? Have you already thought how it should be, your live dimension?

Witch N.: We already did some shows with two guest guitarists and realized that our music works very well on stage. We never planned to be a pure studio project. We will continue to play live in autumn and hope to visit as many countries as possible. 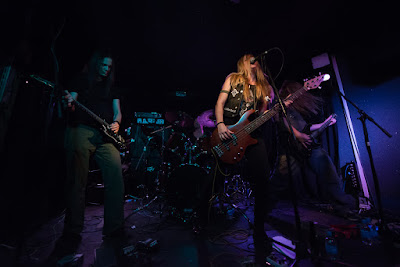 What can you say about the Swiss metal scene? I think that thanks to labels as yours (Czar of Crickets) and Hummus records, there are more bands in comparison with the past, do you agree? And the qualitative level is higher too?

Marko: I think the Swiss metal scene is not better or bigger than other scenes in similarly small countries. And there are definitely more creative and crazier scenes around, like France and Finland. So there is not terribly much happening in Switzerland, but still you can discover new bands that reach international standard like Schammasch or Bölzer. I'm not sure if there are more bands than before now, but maybe they get noticed better and don't just disappear after some years in the rehearsal room – which is great!

Witch N.: Of course labels as Czar of Crickets contribute to an enrichment of the Swiss metal scene, and we are very happy with the work of our label boss Fredy. But I’m not sure if there are more and better bands thanks to labels. A label offers a platform to present yourself in a more professional way and it has distribution deals. But in the 21st century underground bands have to pay for almost everything and to do a lot of promotion and booking stuff on their own. There are not many persons anymore believing in underground bands and investing money and time before there is success.


Are there further steps you are going to promote the album, for example a video or whatever?

Witch N.: We have not planned to do a video shooting. We don’t think it's necessary nowadays, at least not in the underground scene that we are part of. But there will be some more promotion work in early autumn, when the vinyl edition is released on Throne Records from Spain.


Have you already thought about the sound of a new album? Is there already something new you are working on?

Marko: Not really. We were working quite a long time on 'Ilmasaari' and needed a small break after that. But in August we will start to rehearse again with our two guest guitarists and see what happens.

Marko: My three books would be 'Stiller' and 'Montauk' by the Swiss writer Max Frisch and the famous Elvis biography 'Last Train to Memphis' by Peter Guralnick. My records, well, it's completely impossible to name just three, but let's pick the 'White Album' by the Beatles, 'Selling England By The Pound' by the early, proggy Genesis and 'Houdini' by Melvins. My three movies might be 'Rosemary's Baby' by Roman Polanski, 'Wild Strawberries' by Ingmar Bergman and 'The Name of the Rose' by Jean-Jacques Annaud.

Witch N.: As I studied German and French literature, it’s very hard to choose only three books. I would say 'Die Letzte Welt' by Christoph Ransmayr, 'Tigana' by my favourite fantasy author G.G. Kay and the complete works by Heinrich von Kleist. It’s a very hard choice with the records as well, but actually I would say 'Ikonoklast' by Urgehal, 'Sky Burial' by Inter Arma and 'Secondhand Daylight' by Magazine. Concerning the movies, I could easily live without them, but my favourite ones are 'Mulholland Drive' by David Lynch because after three times watching I still don’t get it, and 'Melancholia' by Lars von Trier because of its beauty in sadness. Instead of a third movie I choose a fourth book: 'Les Filles Du Feu' by Gérard de Nerval, a collection of eight lunatic and magic tales. 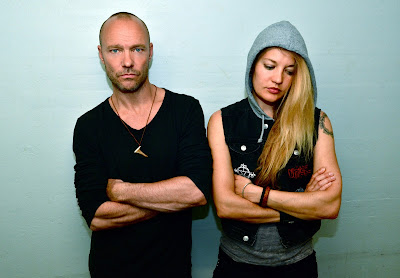 Thanks a lot for your time and hope to see you in Switzerland.

Witch N.: Thank you for your interest in Ashtar – and if you know a good club to play Lugano, go ahead and let us know!