A funereal echo emanates from deep within the abandoned outskirts of Antigo, Wisconsin.
Hidden among the rusty detritus of a long-since boarded up pea canning factory you will find the Tiki Room, and nestled within its hundreds of Polynesian idols and unused bar ware resides our mournful heroes, Wyrding. A group of reunited childhood friends, Wyrding set forth to take the slow, agonic sounds of the early Finnish "funeral doom" sound, translated into a lyric-based "word ritual" setting. Performed entirely on acoustic instruments, that is to say, stripped of their predecessors' volume and bombast, Wyrding concentrates on the style's essence: raw emotion, atmosphere, and a distinct concentration on melody. A play on the old word for "fate" or "destiny," Wyrding's celestial, doomed folk sounds were derived from an aleatoric re-arranging of words, using chance to define structure. It was fate, nay, Wyrd which reunited these wayward souls, and it was Wyrd which defines their unique, mournful sound.


Hi Troy,
Nice to get in touch with you to speak about your band, considering the incredible album you released last year. After 12 months, could you summarize the debut album, in terms of reviews and fan feedback?

Thanks for taking the time to cover our music. Wyrding released its self-titled album in March of this year. We aimed to release it in October of 2015, but due to recurring surface noise on the vinyl, we rejected several test presses from the manufacturing plant which set us into 2016. The album has been public for a little over three months.

We premiered a music video via Invisible Oranges and made a collective mixtape for an exclusive Evening of Light feature. Engaging and thoughtful reviews like those of Brainwashed, Bleak Metal and your very own Pit of the Damned contextualized the record.

We also received touching and deeply personal messages from individual listeners, about connections they made with the music and how it serves a purpose in their lives. It reminds us of why we recorded the album in the first place and inspires us to create more.

True to form, the fan base is limited in numbers, but extremely supportive. Small Doses, the label that released this record, is well aware of this and much like their name suggests, pressed a short run. There are still a few copies available on cd and vinyl, in addition to digital: wyrdingtheband.com


Could you give us some information about the history of Wyrding? What is the meaning of Wyrding?

A few years ago I was in Chicago for a graduate program, focusing on solo recording and installation art. After graduation, I returned to the town where I was raised and formed the group with old friends, for comradery and a desire to write songs in a “band” setting.

Decades prior, Bret Hartl, Jerry McDougal and I attended elementary school together. We held infrequent jams and recording sessions. It seemed natural to reunite as adults, with a focus.

To generate lyrical content, our initial meetings as Wyrding were structured, self-made “word games” that involved elements of role playing, text/image collage and performative ritual. We memorized the end text, burned the evidence. Then Bret and I scored the music. Since then, our writing (or wording) process has grown into something more abstract, but the core is still Wyrding.

Our practice space is a piano bar and our music is composed note for note. Bret lays down the the base tracks on the piano and synth, then I write guitar, vocals melodies and sound design. When the tracks are complete, I transcribe them and teach the others their parts. 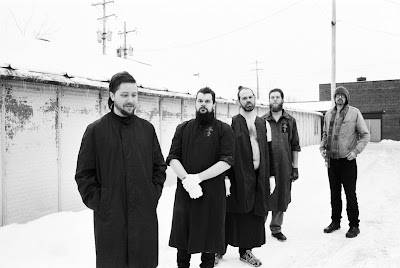 You come from Wisconsin, what about the local scene? Any bands to suggest to the reader of The Pit of the Damned?

Antigo, the place where Bret and I reside, is a rural farming community in northern Wisconsin full of German descendants with a penchant for Slovenian-style polka. It might be a stretch to recommend the local accordionists to readers of Pit of the Damned. Jerry, Kyle and Brian live three hours south of us in the state capitol, Madison. There, I work with Nathaniel Ritter on our longest running collaboration, Kinit Her and its sister project Wreathes. Though not metal, those projects tend to find their way into shared territory with dark and experimental music.

Self promo aside, some groundbreaking contemporary, midwestern black metal bands that we’re lucky to have shared the stage with and absolutely blew us away include:

Do yourself a favor and check them all out ASAP, you won’t regret it.


Let's talk about your album: did you get the chance to read our review? What do you think about the comparison of your sound with that of Decoryah? Do you know that Finnish band?

Of course I read the review, albeit filtered through google translate. I did not have the pleasure of listening to Decoryah prior to it. Once I did, I was moved by the music and flattered by your comparison. It was perfect timing for me to hear it now as we work on our second full length. I hear many similarities, especially in the counterpoint and relationship between synth and electric guitar. I was struck by how fluid the guitar transitions from floating high end melodies, to more driving, low end rhythms - something the guitar doesn’t do on the Wyrding album. Maybe it should on the next one.


Which were the influences during the writing phase?


This liturgic sound needs a special content, what about the lyrics?

The lyrics are laconic, circular and reflective of the writing process itself. Automatically generated and collaged, they are performed and reinterpreted. They rely on memory as a filter.


In my review I wrote that the video you made misleads by your actual sound, why this choice, it was much more indicated for a black metal band? What do you think?

I can see that, but it didn’t occur to me at the time. We filmed quickly, making gut decisions as we worked. It was the first “traditional-style” music video I’ve made. Considering how limited time and resources were, I’m satisfied with the end product, regardless of its implied genre. It accurately depicts the band performing in my studio space. The masks were a practical choice and we wore them out of necessity rather than visual aesthetics, though I can’t say much more about the costumes at this point.


Are you already working on new material? Shall we wait for some news in your sound? But talking of sound, how would you define your own? Funeral? I disagree.

“Romantic Downer Alt” wasn’t a choice in the bandcamp drop down menu. We are slowly generating new material. Though a strand of cohesion between this album and our debut will be evident, the overall sound will be more diverse, in more ways than just expanding on our old kick/snare/kick/snare drum formula. We’re developing new modes of writing, one of which has a more lo fi industrial vibe, wider ambient passages and more complex rhodes parts.


Are you planning any concerts this summer? What is a Wyrding concert like? I would think that it is not very easy to perform your music live on stage: what fans can expect to see?

We performed three times prior to the record release and have nothing further scheduled.
Our bassist, Jerry McDougal built our amps, cabinets and many of the effects pedals from the ground up. The sound he’s created is warm, massive and best experienced in the live setting. Expect that I’ll be tangled in wire clutching a night light, making an ass of myself and pretending it’s cool.


The US Presidential election is coming and the whole world is worried about Mr. Trump: how do you live during such a moment?

One day at a time. 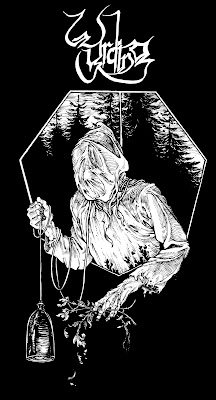 To conclude, a simple (it is never simple, I know) “desert island list”: three books, three records and three movies you can’t live without.


Troy, it was great to speak with you and to know much more about your strange and unique creature. Hope to listen to a new album of Wyrding.

The pleasure was all mine.